'Hey look, it's Dora the explorer!' - actual words said by a stranger when I was hiking through my local park to train for the Iceland trek I did a few years ago.
This book! Not only does it have the sexiest cover, it is utterly smart and moving and funny from start to finish.
A long weekend back in God's Own Country with friends, family, fun and sun. After the longest time away, my Yorkshireness is restored ☀️
Have you pre-ordered your copy of @howtoglitteraturd's incredible memoir Glittering a Turd yet? I've just had the absolute honour of reading a proof copy and it is utterly beyond brilliant. For the last eight years or so, Kris Hallenga's annual post on her blog How to Glitter a Turd has always been one of my best reads if the year, so I knew that her book would be brilliant, but it's even better than brilliant, it's a moving, life-affirming must-read.

I just went for my first check-up mammogram, exactly a year and a day since my breast cancer surgery. 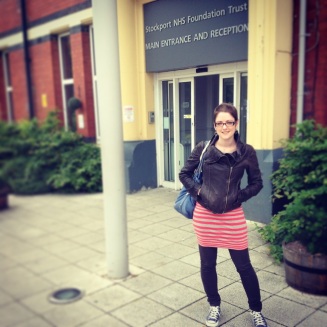 My boobs didn’t mind the pancake-squashing machine too much and the lady who squashed them in at my new hospital in Stockport was lovely. I know a lot of women say mammograms are comparable to torture, but honestly I don’t find them bad at all – maybe it’s a boob size thing, but I’d take mammograms over needles and cannulas any day of the week.

Anyway, I’ve received a lot of sweet messages on Facebook and Twitter from friends and supporters wishing me good luck, and I just wanted to thank you for those messages and clarify that I’m actually not worried about the results of the mammogram (which should arrive in the next couple of weeks).

I know there’s always a chance of a recurrence in one of my breasts, but those chances are so low after all the chemo and radiotherapy I’ve had that it doesn’t even bear thinking about.

My Worries List is currently occupied by much more mundane concerns such as whether I’ll be able to get visas in time for my big post-cancer trip to southeast Asia and how many times it is acceptable to ask my Dad to hire a van and drive my worldly goods to whichever corner of the globe I happen to be moving to next. (On this topic, I am currently something of a nomad but will be an official London resident as of the end of September).

I know most of my fellow cancer-fighting friends spend oodles of time fretting about recurrence and tests so I don’t want to trivialise the issue at all, but firstly I check my breasts so often these days that I hope I’d detect a new lump quicker than any mammogram anyway, and secondly, the much greater risk to my health would be a metastasis to the brain or elsewhere, and that is something so completely and utterly out of my control that I do my best to purge any thoughts of it from my head the moment they enter.

I’m still waiting to hear about having a possible MRI breast scan in the next few weeks, but apart from that, my next appointment is with my surgeon in six months’ time, and then with the oncologist six months after that. Although I’ve had a lot of hospital visits in the last few weeks while I’ve been transferring from private health to the NHS, I’m now looking forward to fewer appointments in favour of making the most of my very fortunate life!

I’m utterly fried from a crack-of-dawn flight from Dublin to Manchester this morning, so I’ll leave you with this pic of me and my boobs enjoying a delicious pre-mammogram cocktail (Gin and Earl Grey Martini – highly recommended) last night. The three of us are toasting our triumphant survival of the last 12 months and, more importantly, a long and happy future together. Cheers to that!